Been waiting for a way to use a form to submit data to Fusion Tables? Wait no longer

Updated: A Fusion Tables Google Group user posted a script that eliminates the need for a form. I wrote about it here. It allows you to update a Fusion Table from the Google spreadsheet. You still need to trigger it, but it works well.

Among the many feature requests/issue tickets for Google's Fusion Tables and the API has been the ability to submit information to Fusion Tables via a form, and to keep a spreadsheet and a table in sync.

If you want a basic setup -- grab user information and POST it -- the wait is somewhat over, though some restrictions apply.

With a simple script from Kathryn Hurley of the Google Fusion Tables team, you can set up a Google Form that your users can use to input data to a Fusion Table. The script takes advantage of Google's AppsScript tool to transfer new form input into your table.

There are just a few steps to get the script up and running:

There are some necessary steps, caveats and restrictions:

In the end, you get three elements tied together by a pretty good little script: 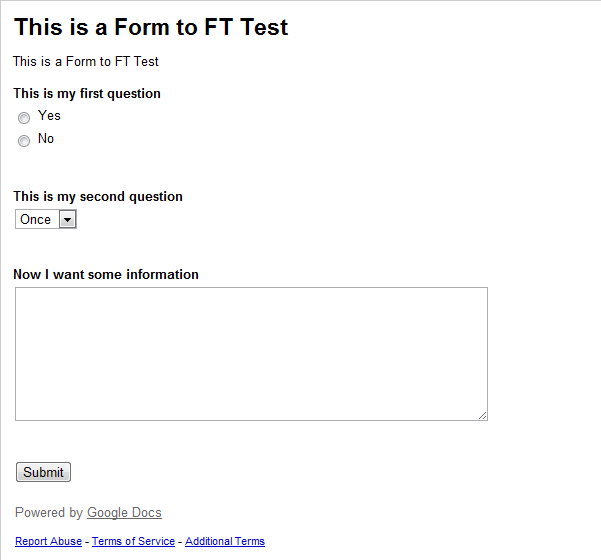 So I'll report back once I've tried this method and combined it with plotting location... Still, I'm closer to my goal and now I have a foundation to work toward something like this...