Some containers are better for certain things, or how to break news in print 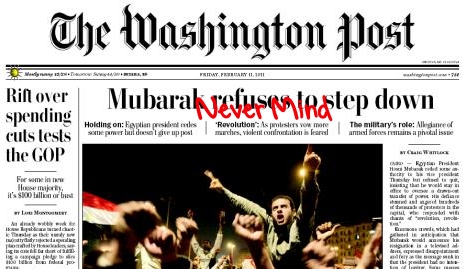 Ten years ago, this wouldn't have been anything to think about. News happens and you read about it in the daily paper.

Now, well newspapers are held up as something to laugh at.

The whole "print vs. online" and the "internet is killing newspapers" argument is a sham in my opinion. It boils down to content and containers.

That doesn’t mean it is obsolete as a container for content. That does mean some folks have to re-think what kind of content best fits in that container.

Which is a  sentiment put forth in the Recovering Journalist article that brought the above photo:

What are newspapers to do? A couple thoughts: First, maybe it's time for papers to stop trying to be the snapshot of the previous day's events. Rather than print information that's almost instantly out of date, they should concentrate on providing more analysis, perspective, context, non-news-pegged features and forward-looking coverage—much like a newsmagazine. That would require a major change in editor-think, but it would better reflect the new world. The whole "newspaper of record" thing is now pretty passé.

More fundamentally, this is an argument for papers to double down on their quicker digital news-delivery products.

They need to finally come to grips with the idea that the product to which they still devote the vast majority of their resources—that print edition—shouldn't be getting primacy in management attention and resource allocation. Unfortunately, in just about every newspaper newsroom I know of, the digital version is very much a second-class citizen, while most of the attention still goes to putting out a product that's immediately out of date. That strikes me as poor priortization. The news—and the audience—now exist in a real-time digital world. Shouldn't that be where resources are focused? The print edition should be the afterthought.

Kind of makes you wish for some kind of plan for a content-first strategy, one that would gather the news and then decide how to package it in a container.