Three days later - there are two things I can't get out of my mind regarding jury duty.

It's 2010. Efficiencies have been found in any number of businesses and industries. And yet we really can't find a better way to administer justice than to have 25-30 people all hang out in a room because they might be needed? Perhaps that is part of our civic responsibility: once every so often you will have eight hours of free time to just relax. You won't have to work, but you will have to wait for something.

It's 2010. We get paid $17 for eight hours yet you charge $1.75 for a bottle of soda. I have any idea, give us the stipend in quarters and we'll give it right back to your the vending machines.

Really, I enjoyed my day. It was great to just have some time to read and learn new things on the laptop. But the above two things are underlying principles that I can't ignore.

2:30 - It's an early dismissal day. No need to sit in judgement of peers today. I'ma gonna hurry up and get back cause traffic from the north into the city if bound to be brutal.

2:00 - My tablemate and I -- I'm sharing access to the electrical outlet -- decide there needs to be a Breakfast Club remake set in a jury assembly room.

1:30 - To my last point... This came together way easy writing very little code. Thank you to The World in Lawrence. Amazing. 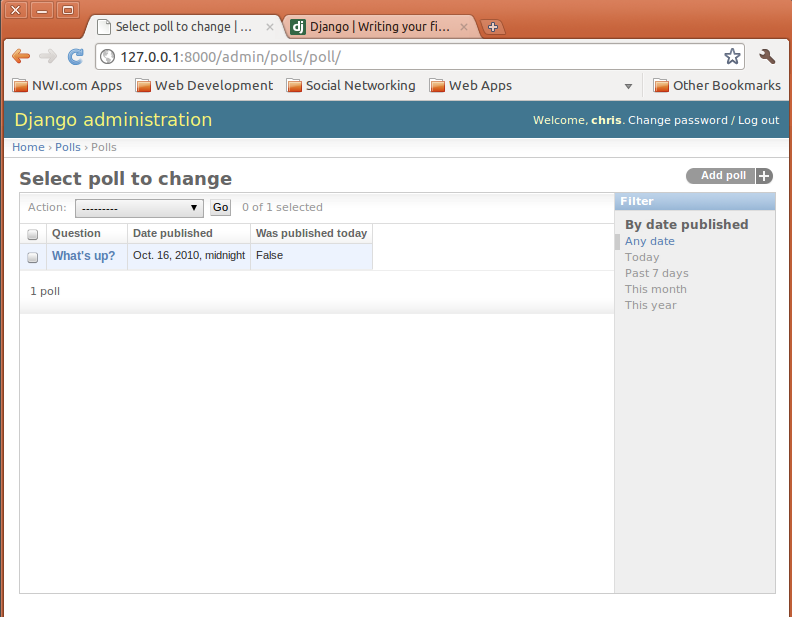 PS - No one has been called to do anything. It's kind of fun though. I mean, you are an American citizen and every so often we need a bunch of you to gather together in a room in case we need you or something.

PSS - I could post the photo, but I had better not, There is a glass room that one enterprising woman has taken over. She brought in a wired phone head set and is holding conference calls. I glanced over a bit ago and she had her feet up on the desk. Brilliant.

12:30 - The blessing of this whole jury duty thing is that I have been able to work through a django tutorial that I have been trying to tackle for months. But because of all the time it takes to figure out how to get the dev server up and running, I'm never able to make it very far.

Enter Ubuntu, which makes it easy to set up out of the box.

So the geek in me set up Virtual Box to run Ubuntu inside my Windows XP machine, and now I have finally gotten to the third page of the blasted tutorial and was able to make an actual log-in screen appear. Woo hoo!

Ubuntu is pretty slick. First, most every application you need is free. There's a Photoshop clone, and Desktop publishing clone. Image editing, audio playback, Google Chrome. I'm enjoying playing with it. The other thing I found is that Ubuntu can breathe new life into old machines. A 2001 Dell Inspiron with 500 MB of RAM not plays along without the dreaded "bluescreen of death."

I don't think I am ready to make the ultimate leap and ditch XP, but that's ok. I may find a home for it on my 333mhz 4GB HD Clamshell Ibook from 2001 though.

And for the record, I was a kind who, during one summer, spent much of it inside at my RadioShack computer programming in basic trying to get a text-based adventure game to work. Never did cause I couldn't figure out how to save programs to a tape recorder. Seriously, we now have flash drives and cloud storage. And I had to use a tape recorder... My kids will never believe me.

Back to the Django. 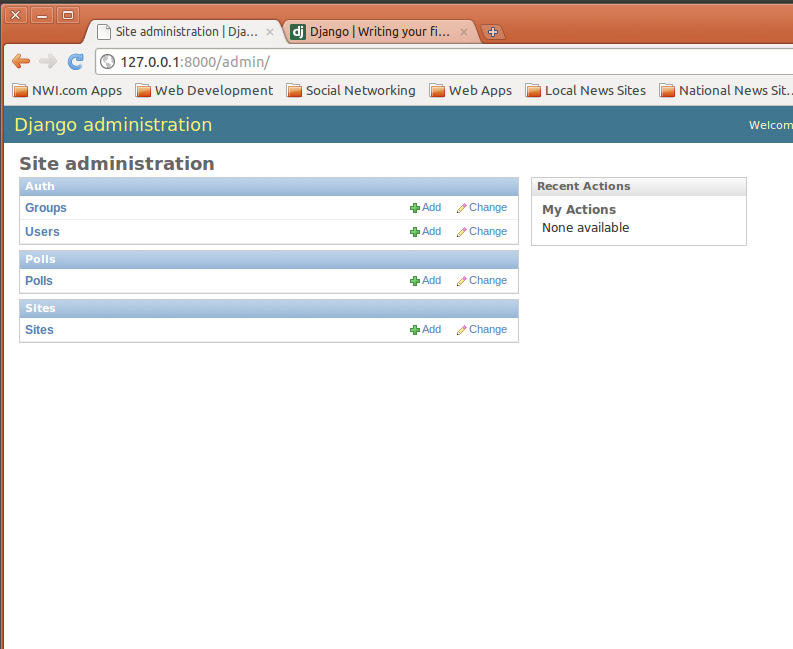 10:30 - I think I am the only who wants to be called into the courtroom and selected for a jury. It's a strange thing. All week, everyone looked at my like to contract a bizarre form of leprosy. I think it would be interesting, and give me a chance to perfect my micro-management tendencies.

So thus, this becomes the Holy Grail of sorts. 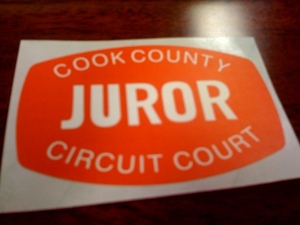 9:30 - The jury assembly room supervisor calls us all over and asks that we watch a video that explains out duty as a juror, and what is expected of us.

The video -- titled "You .. the juror" opens with Timothy C. Evans, who is the chief judge of Cook County Circuit Court.

While the intro at least feels like the video was made in the last 20 years, the tour of rights and responsibilities and the "nobility" of the U.S. justice system takes a turn when our narrator becomes Lester Holt. Yes, the NBC-network Lester Holt.

But it's the Chicago Holt - the late 1980s one who went on to spend 14 years in Chicago with WBMM before moving to MSNBC. The Chicago Lester Holt prior to shaving his killer mustache.

Seriously, it's a great mustache, as shown by this fuzzy WBBM broadcast.

Indeed, the Lester Holt mustache gets quite a few hits when searching Google.

-- It's mentioned here in a Chicagoist post about jury duty at 26th and California.

-- Lester Holt's Mustache is a regular in the comments on the Capitol Fax Blog, a rolling news site for all things Illinois politics.

There are more, but those struck me in the two minutes I spent researching the subject of Lester Holt's mustache.

So then we're told that the Circuit Court of Cook County is our court, and our job is to determine the facts of a case and apply law to those case.

Lester Holt tells me that if I am excused as a potential juror, I shouldn't take it personally. Easy to say. He doesn't have my self-esteem issues.

9:19 - Already the time to do something other than work pays off. Right now in the form of Icon Generator Pro, an Adobe air application that allows you to -- well -- create icons. 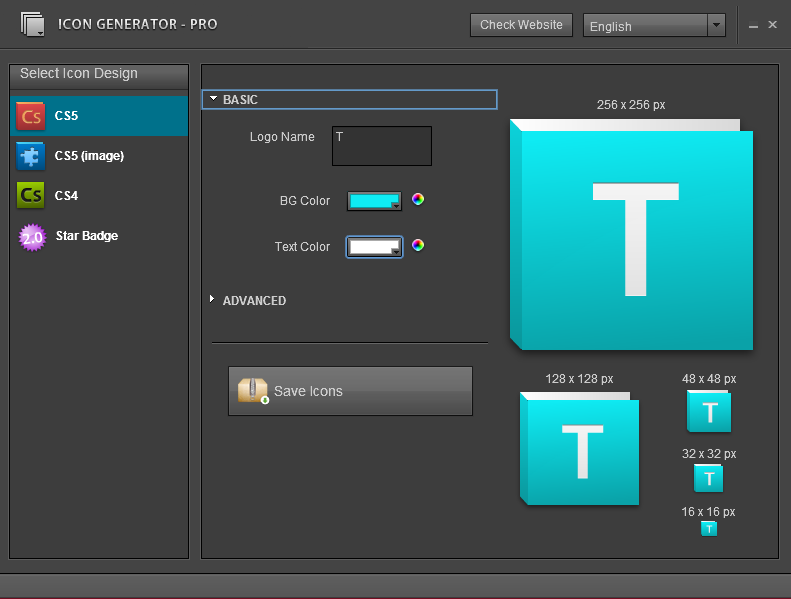 The interface is simple and clean and super simple to use, and a blessing for design-challenged folks like myself. I still remember being made fun of in high school for wearing a red and white shirt with magenta pants. Of course these days I think I'd be made fun of for wearing magenta pants.

A couple other Adobe Air applications that will make online work that much more enjoyable for someone who has only came at this stuff in the past couple years -- my newbie status allows me to get geeked about little toys rather than a time test process.

Shrink-O-Matic allows you to resize photos into gifs, jpgs or pngs using a drag-and-drop interface.

WebSnapshot lets you input an URL which is than converted into an image file.

Fontpicker shows you the difference between ATRotSanSerExtBol and Neutra Text TF Light, among others.

Color Browsers and Color Picker are saviors for those of use who like to match magenta and red together.

9:00 - Got the only table with an outlet in the jury room. Set up myfi and I am ready to spend 8 hours waiting to be rejected.

Immediately a woman walks up and asks if they have wi-fi. I say no, but I'll sell you bandwidth at a premium. OK I didn't, but me thinks there is a side business that can be had here. Selling wi-fi access to folks in a gadget age.

8:40 - So the sheriffs deputy goes through my bag, says don't take this the wrong way but you're a real computer geek? Hmm .

7:40 - Driving from Chicago to the Northwest Suburbs on Friday morning for jury duty is not my idea of fun. I've made the commute out of the city to the south for pretty much five years now, and while those motorists have their own tics, I've learned how to combat them. Rush hour with north suburban motorists -- another story completely.