I'm not a web developer, but I know some things about web design and what particular genres of websites should do and strive to accomplish. And I'm not a programmer, but I know some code and some functions, and can get a reasonable idea what variables can be swapped out to make something happen.

But as much as I want to be, and as much as I learn things here and there, I don't know when to optimize script loading time and when to sanitize user input to avoid sql injection, etc. I don't know what a https request is, and RESTful apis make me want to take a nap.

No, I'm an editor. Whether sports editor, news editor, assignment editor, online editor and editor-in-charge-of-the-paper editor, that's where my skill set lies. And lately I've been looking at what I have learned to do online with a text editor, and I think I have learned to be a code editor.

That has to be how I came up with this -- dare I say webapp -- in a weekend, a thing I call "Things Outside: Madison," but could as easily be called Googling your way to making something work. 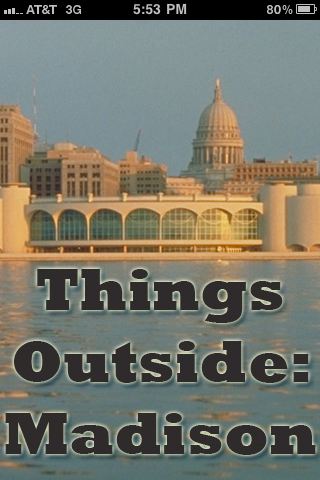 T.O.M. -- which I think only works on iOS & Android right now because a friend tried it on webOS and the geolocation didn't work, but if you have Android let me know if it works -- will find your location and show you parks, beaches, pools, hiking trails and other things nearby that you might want to enjoy on a nice day. You can change the map layer to display only those things you want to see, and to help you arrive at your destination, you can toggle on and off biking trails.

I don't profess to have put together something unique or revolutionary. Not in the least. And no way is T.O.M. as good as it could be. But for the first time in my online tinkering I identified a problem -- albeit one for my wife and I, who just moved back to Madison -- and developed a solution.

But back to being a code editor.

Editing is largely following a set of rules, guidelines and suggestions that are surrounded by several levels -- and years -- of preference, and often large thumbs with a healthy dash of coaching.

It's also and thorough line-by-line editing of a news story, a need to not only understand the principals of grammar and journalism at play, but become knowledgable about the subject of this particular story, the sources quoted and the material cited. It's knowing how to tell a good story, whether it's about a community bake sale, a husband and wife being separated by war or a guy trying to develop a strain of chili peppers that will grow in the colder Wisconsin climate. It's know what to hold back for another story, and what to run with.

And those experiences are what I have found to be helpful when throwing code against the wall -- html, css and any number of snippets of programming languages. What does this little combination of code supposed to, how does it do it, and can it be used to do something else? Or is it better used somewhere else?

Much like well-written paragraphs can be interchangeable throughout a news story, well-structured code can be adapted and reused in project after project.

For anyone interested in what I did to get T.O.M. off the ground, I'll write up an explainer post on how I cobbled it together, and what I'd like to add -- some actual design, driving directions, custom map markers and outdoor places to eat -- because that's how I learned.

And if a code editor can pull something like T.O.M. off in a weekend, just imagine what a real developer could do.