Eulogy: Remembering that Sunday with my dad

In preparing for today, I spent a lot of time trying to think of the perfect story to share about dad; the kind of moment that would sum up who dad was, and what he meant to our family.

There are the times when I would go to work with dad when I was little. When I see the back-breaking work he did. When I would hear him sing and whistle.

I remember one day, we ate up at the "W" Bar in Mount Horeb — it was across from old Eggum and Johnson building. Between sips of Mountain Dew and playing the video game they had there, I twirled around on a barstool. Dad told me to stop or else I'd fall off and hurt myself.

It was the first time I remember having the wind knocked out of me. And it was the best damn cheeseburger I've ever had.

There's the time I was shooting at pop cans with my BB gun on dad's flat bed trailer ... toward the truck. I was so oblivious at that age that I had know idea what dad was talking about when he asked why the truck's back window was all shot out.

There are hundreds, thousands of these moments. We all have them. Those here today have them with dad. 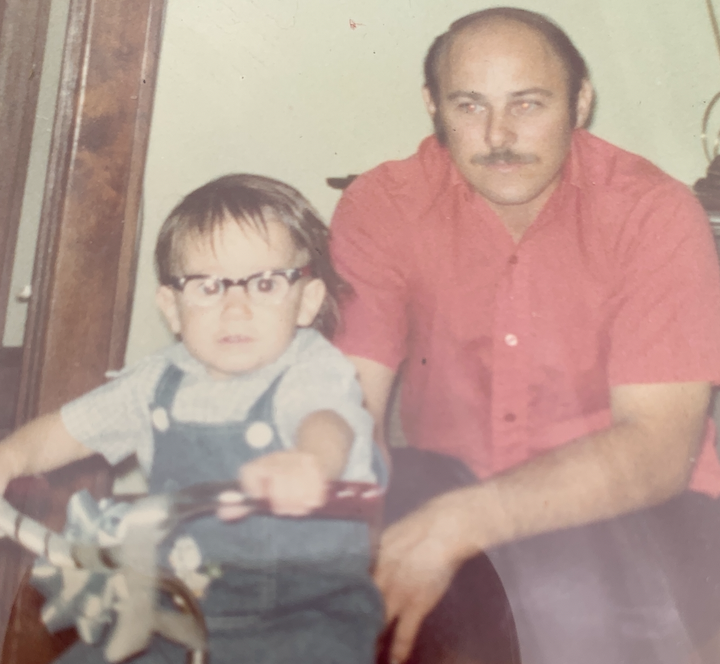 Here's the thing though. Life is a series of moments ... of stories ... of successes and failures. No single one can properly put it all into context. So finally — this morning — I gave up trying.

Instead, here's a story I have been trying to tell for the last 8 years.

It sticks out to me, because it left me with the sense that — like so many of us — Dad always wanted some recognition that he did good. And like many of us, I don't know if it could ever come from within himself.

I don't know if dad could look at what he had accomplished, and objectively know that he had done enough.

Because outside validation means something. When someone else tells us we succeeded — especially when so much of life has been spent tinkering and just making it work — that outside validaton just seems to carry more weight. We get a chance to take a bow, to take a victory lap of sorts.

I was there — with dad — when he decided he wanted a victory lap. And back on July 8, 2012, at the annual car show in Blanchardville ... that day he took it.

The car show was an annual point of contention between mom and dad. Year after year it fell on her birthday weekend. And this year he showed his old Honda motorcycle and his custom-made side car that he had affixed with western memorabilia all over. He added training wheels to the motorcycle to give his back some time off when at stoplights.

A man who knew dad's oldest brother Wally came by. He might have been named John, and he's from town.

"All these decals and no flame decals?" John said to dad. It wasn't really a question to be answered. More one of those Midwestern ways of starting a conversation.

Dad said it's all just made up of some old parts and junk he had laying around.

The man — John — took a moment and kind of laughed. "Well you're a Keller"

It was getting hot and dad never did well in the heat and humidity. He was ready to leave, but determined to make an exit. So he started up the motorcyle and hit the main aisle. Giving the throttle a couple cranks and revving the engine, folks looking the hot rods moved to the side. A couple times he had to lay on the old-time ca-hooga horn for good measure.

And there we went, rolling past the Mustangs and Malibus and Mercurys, the chrome and engines glistening in the July sun. But there was one more lap to take.

And as we drove out the gate and through town there was a group of Harley riders that had gathered outside a local tavern.

And I have to point out ... Dad was always ... self conscious isn't the right word ... he always seemed shy? ... of his creations around strangers. On more than one occassion he'd remark to me how he thought the people with the fancy motorcycles looked down on what he had created. How the ATV guys looked down on the western stage coach "buggy" he created.

So we kept driving and went to the top of a hill near the entrance to Yellowstone Lake. We talked about someday taking the ATVs out for a ride.

We turned around and went back through town and past the motorcyclists. Dad blasted his old-time ca-hooga horn for the bikers.

They waved and gave a few hoots and cheers and dad smiled the biggest smile.

For myself, and I think my sister, It's like a fundamental building block, an atom that formed and shaped us and cursed us until we came up against enough times to recognize how it works, how it kind of is always keeping us at bay or from reaching something.

That drive home in my father's side car, churning down the backroads of southern Wisconsin ... I'll never forget feeling. Father and his son, alone in their own thoughts, together ... wind hitting them in the face and the sun in their eyes.

We drove past the fields and farm buildings that have passed through generations of men and women and sons and daughters. I began to wonder if dad did any work on any if these buildings, if he sold barn equipment to any of the farmers.

I don't have long to daydream about it before dad slows the motorcycle, leans over and says, "This yellow steel building on the right is one of the first buildings I built for Kenny Laufenburg."

For the past 8 years, I've spent a lot time thinking about why this day sticks out to me.

For one, I carry an amount of regret about not sharing with dad that I had a job interview the next day and that I really wanted to go for it. Even though it meant I would leave him and mom for a job that would ultimately take my wife and myself to California. To award-winning work and recognition.

But it also sticks out, because it gave an adult me a sense of the legacy that dad had built, of those things that will outlive him. To hear stories of these moments that prove that dad was here and left his mark

And I was there to provide outside validation for dad. To be able to carry on and tell others that Lawrence E. Keller, the youngest of 10 children, spent time on this earth. That he was here, and while he was, whether he knew it or not: he made a difference.

His only son... His only daughter... All of you gathered here today. Are proof of that.

Dad sang all the time. There are so many songs that will remind me of dad. But it's one that to this day will always bring me closer to him.