Back from exile, my friend the cluster headache reminds me that pain know no limits

So my good ol' friend, you decided to come back for a visit? How long has it been? Three years or so?

Oh, and you brought a steel rod with you. And a drill? You aren't going to start poking me on the side of my face are you? Coming at me from behind my right eye at odd hours, waking me from sleep to terrify me with a sensation that must be what it feels like to bore into the earth, but never break through.

Where have you been, and why come back now? I thought we had reached an understanding: You stay away and I don't have to wonder when you will appear -- everyday at the same exact time for the foreseeable future it seems -- and when I will be able to say again that it's been three years since you were in my life.

Friday and Saturday morning my body's cruel joke of an alarm clock went off between 6:15 and 6:20 a.m., bringing me these small sensations tingling the area where my eye socket meets the right side of my face. Those who wear glasses know this area as the temple.

On mornings when the cluster headache arrives, it's more like a temple of pain. 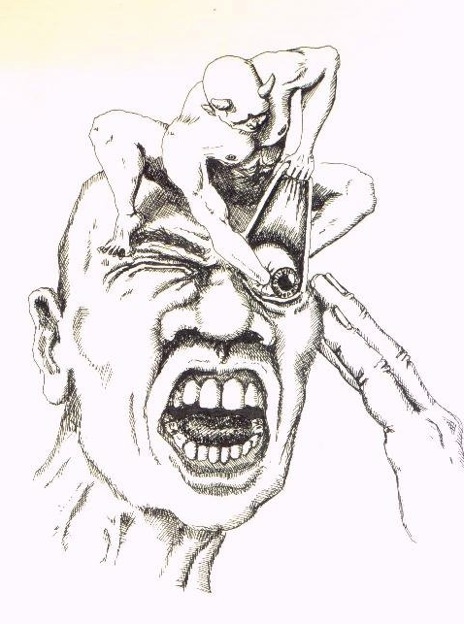 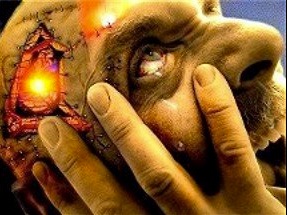 A week ago I found the first signs that another episode was on its way. Shawn and I were watching a movie when I realized I hadn't been paying attention due to this tingling behind my eye. I went outside for some air and took deep breathes and thankfully I was spared.

It rang the doorbell, but ran off my porch.

Friday morning -- Friday the 13th of all days -- the headache kicked down the door at 6:15 a.m. and announced it was here by rocking rock my head gently against a brick wall while hitting you upside the face with a baseball bat.

After about 15 minutes of rubbing my temple, rolling back and forth in bed and trying to think of something other than how damned bad this hurt, I reached the crest and the pain finally broke and rolled back just as quickly as it arrived.

I feel back asleep only to be woken again about 8 a.m. with a headache. This one lasted about 45 minutes.

Sunday morning, I woke just after midnight and got more practice -- about two hours worth.

And now I'm left wondering how long this episode will last. Can I expect to wake up Monday morning at 6 a.m. to cut my hair? Will a headache hit next weekend, while I'm at my cousin's wedding? Or at the various concerts I'm attending? Or a friend's party? And will I find a place to escape from the pain?

A cluster headache comes on quick and can last between 15 minutes and more than three hours. Sometimes you will start to feel an attack coming -- sufferers call this feeling "getting shadows" -- and other times you won't.

According to the Mayo Clinic, these headaches are characterized by, among other symptoms:

Speaking from experience, everything that comes with a cluster headache takes a backseat to the pain. And the words used to describe the pain -- boring, sharp, penetrating, burning, poking, throbbing -- really don't do the feeling justice.

Imagine taking a drill and letting bore through the side of of your face right behind the eye, then pulling and pushing it in and out and rhythmic intervals. Now while you are doing that, bash that side of your face against the wall a few times.

Done? You're close to feeling what these things are like.

Of course there are always reasons for pain, and this particular sensation could be caused by blood vessels dilating and creating pressure on the trigeminal nerve, which branches up past the eye and down through the face.

But what causes the blood vessels to dilate? Many theories abound.

A well-sourced wikipedia article cites research that abnormalities in the hypothalamus are to blame.

Among the areas the hypothalamus is responsible for are body temperature, hunger, thirst, sleep and circadian cycles, which could be why when the clusters come, they come at the same time of day, and during the same seasons.

I'm one of the lucky ones. I've had several lengthy breaks between episodes, which makes it somewhat more maddening I suppose. But in reading tales from sufferers online, some have dealt with these headaches multiple times a day for years at a time before they get a break. Some have never had a break.

Welcome to the club

First time I remember the headaches was the summer of 1998; it might have been late May or June.

I was with friends at a backyard BBQ after finishing the college semester, and this sensation started washing over me. The pain didn't come all at once. It builds, slowly at first. Throbbing, pulsing, gaining steam and momentum, affecting more and more of the area around your eye socket until the until thing is engulfed in this pulsating pain and that moves in and out until you can visualize a blood vessel in the side of your face expanding and contracting and wonder when it will explode through your skin.

I escaped the situation and dealt with the pain in the car, alone, away from everyone. I don't know how long that first cluster headache lasted, or the duration of that episode. But I learned all I needed in that span: this is not something I want to experience.

In the 13 years or since, I've probably had seven or eight episodes, all with differing durations and ideas to as to why I experienced these.

My eyes were adjusting to new contacts. Or I spent too long with my face clenched up in contemplation or due to stress. Or maybe my brain was only now showing affects from a bike accident when I was younger. I had a tumor. I had a brain aneurysm. Doctors told me they were stress headaches or migraines.

In the years since that first experience, I've tried several coping strategies:

The latter has actually proven to be the best for me, as the scent and warming sensation gives me something soothing to focus on while my head feels ready to explode.